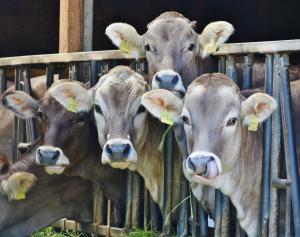 Animals and Humans are not separate by nature as neither exists as a single Independent entity.

Is animal farming a human right? Or, is it a sign of human ignorance? Today's science demonstrates the latter, and proves the horrific consequences of it.

CALIFORNIA, USA, June 4, 2019 /EINPresswire.com/ — Is animal farming the greatest delusion of all times?

Humans assume that animal farming is natural, even our right, but undeniable facts prove the opposite. In fact, this may be the greatest ignorance with most horrific consequences to humans and animals.

Vast Self Corporation's research based on one of the most compelling discoveries by scientist and philosopher Mr.Nāgārjuna (c. 150 – c. 250 CE) validates beyond doubt that animal farming may be the greatest ignorance of all times. Mr.Nāgārjuna first made the insight public 1900 years ago, proving the universal human belief in how humans and animals exist is faulty. His in-depth investigation as to how humans and animals exist versus how humans assume they exist reveals a vast discrepancy. Based on the sensory experiences, humans believe that animals and humans exist as singular independent beings; however, science and logic proves it impossible and demonstrate the horrors of this ignorance.

Vast Self Corporation explains that healthy human senses correctly perceive phenomena such as humans and animals but incorrectly grasps each to exist as an independent singular entity having own-existence.
The incorrect perception is not due to poor eyesight or faulty brain functioning, but our ingrained conviction that animals and humans are single independent entities existing as own-being. To exist as own-being, following the human assumption that animals and humans do, each must be a single sovereign entity. The kind which is genuinely a single being hence must exist necessarily without parts and able to produce itself by an independent inner nature without causes. However, this is impossible for humans or animals as none can set themselves up by an independent inner nature, and neither is a singular being as all have parts that are caused. No one can claim to know a human or an animal who can exist as a single independent entity without parts and causes. Thus, neither can come from nowhere or create itself, yet our understanding is the opposite. Consequently, our senses trick us due to our ignorance of how humans and animals really exist. Our beliefs oppose this, so our mind perceives the lie.

Vast Self Corporation spoke person says, "the science and common sense logic revealed by Mr.Nāgārjuna proves that all animals and humans are produced by countless causes and parts; thus, each exists without independent own-existence. Technically they are not even separate from each other as neither exists as an independent singular entity the way we assume. Thus, animal farming is an atrocious idea with most horrible consequences to owners, consumers, and farmed animals".

Please visit https://www.crowdrise.com/o/en/campaign/end-animal-farming to support video production and distribution of this research.

About Vast Self Corporation:
Vast Self is a 501(c)(3) non-profit whose sole purpose is to restore peace and happiness in the World. This is accomplished by demonstrating how all personal and World problems can be eliminated permanently by recognizing the single reason responsible for their existence. We aim to provide educational tools that will serve all individuals, and organizations seeking permanent solutions to personal and World problems.

General information about Vast Self Corporation can be obtained at the VastSelf.org. Follow @VastSelf on Twitter, and visit crowdrise.com to support their cause.