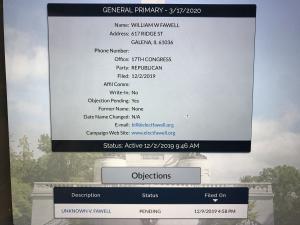 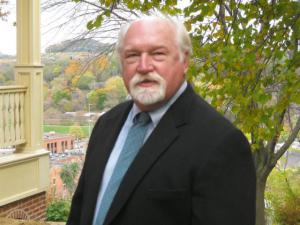 Censorship is the Voice of Corruption.”
— Bill Fawell

GALENA, ILLINOIS, USA, December 12, 2019 /EINPresswire.com/ — “Yesterday, the Illinois Election Commission repealed 235 years of legal precedent and accepted as a plaintiff, “Unknown”, to contest my petitions to appear on the ballot for Congress in the 17th Congressional District of Illinois in “Unknown vs Fawell,” Bill Fawell announced today. “Only in the hopelessly corrupt State of Illinois could government have raised the bar of unprecedented corruption and incompetence to a whole new paradigm.”

Lawsuit protests to contest petitions to run for office in Illinois were accepted up to 5:00 pm December 9th, 2019 in both Springfield and Chicago. UNKNOWN filed their petition at 4:58, Monday December 9th, 2019. Up until then, in the entire 235 years of legal history in the United States of America, courts have required there be a plaintiff in all lawsuits and legal actions against persons or entities in accordance with the 4th Amendment, legal precedent and common sense.

“This is just another bump in the road by the corrupt Republican and Democratic leadership in Illinois and America to derail my efforts to provide the voters with a choice instead of a selection: To give the people a chance to vote for our Constitution and our Nation instead of another corrupt politician and their party. The choice to vote for a candidate who will represent all We the People, and not the corrupt parties who want to control everything we Americans see, hear and how we vote,” said Fawell.

“Corruption has taken over my beloved Republican Party in Illinois,” Fawell explained. “Last time I ran, my most honest and worthy opponent Mark Kleine resigned from the race saying the campaign people were the most corrupt people he had ever met and he would no longer associate with them.”

“Today, these same corrupt individuals have imported an anti-Trump carpetbagger, Ester King of Chicago, a globalist and member of the Council on Foreign Relations domestic affiliate, since renamed Chicago Council on Foreign Affairs to oppose me,” Fawell pointed out. “She represents the Party and had has told me so herself, whereas I represent the People from which I come.

The 17th Congressional District covers 6933 square miles stretching from south of Peoria, north to the Wisconsin border and from the Mississippi east to Rockford representing Northwestern Illinois.

“Censorship is the Voice of Corruption, and I’ve been slandered nationally by CNN and the Soros Mediamatters /Shareblue national propaganda machine, their distortions quickly embraced by the corrupt Republican leadership in Illinois.” Fawell continued. “Since then I have been censored and banned in 11 of 14 counties in the district as the black hand of corruption has twisted the lesser minds of sycophants who occupy their chairmanships.”

“I must be a pretty dangerous fellow to attract the national attention of the Republican and Democratic party machines of corruption,… and I am,” Fawell confessed, “because I represent the People and support President Trump’s Inauguration Promise to return the powers of government back to the People. Clearly, anyone who has attracted the deranged enmity of both parties must be doing something very right.”

“Accordingly, my campaign slogans are “People B4 Parties” highlighted by my “Let the People Rule” legislation; and I will never bow nor surrender to the corruption that grips America today,” promised Fawell. “This is what scares them into committing desperate acts like this in, “Unknown vs Fawell.”

“Clearly We are Winning.”