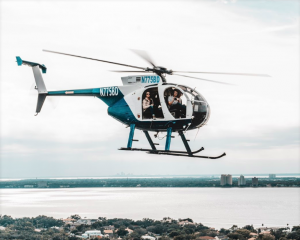 SARASOTA, FL, UNITED STATES, January 9, 2020 /EINPresswire.com/ — Humans’ ability to harness the power of fire is one of the most significant milestones in evolution. With fire, people have learned to cook, weld, and illuminate the dark, among other things. But fire, like many things in nature, can also be dangerous. For this reason, humans historically have sought to suppress fire when it’s out of their control. However, natural fires play a crucial role in sustaining a healthy ecosystem. To sustain Florida’s vast and diverse wild areas while protecting human inhabitants, Niclas “Nick” Herle and his company Heli Aviation are assisting the Florida Fish and Wildlife Conservation Commission (FWC) in administering controlled burns.

When humans settled the land, however, fire suppression became the norm to prevent flames from reaching settlements. Incidentally, this practice of suppressing natural, low-intensity fires can result in overgrowth and overcrowding, resulting in a buildup of brush. In turn, when a fire does occur, whether by forces of nature or human accident, it is typically much more severe and more difficult to contain compared to those that occur as a regular part of the earth’s life cycle.

Forest and wildlife organizations such as the FWC plan and execute controlled burns with the help of aviation professionals like Nick Herle to get the best of both worlds: a healthy forest and safe communities.

“Naturally-occurring fires caused by lightning once played a major role in forming and maintaining much of Florida’s pinelands, sandhills, scrub areas, prairies, and wetlands,” Nick Herle explained. “Today, the FWC in cooperation with Heli Aviation uses safely-controlled prescribed fire techniques to improve and maintain habitats for deer, quail, turkey, and many other wildlife species.”

Nick Herle has long been looking for ways to use his talent and passion for the good of society. At age 16, he founded his first company specializing in mobile radio services. His objective was to make professional-grade radio communication accessible and affordable for all people and lower-income firms. His interest in radio communication quickly transitioned into his pursuit of aviation, a field he has been dedicated to since 2007.

Whether it’s assisting in controlled burns or helping with disaster relief or search and rescue efforts, Nick Herle is constantly looking for ways to apply his passion for aviation to helping individuals, businesses, and communities to make the world a safer and better place.

Learn more about Nick Herle via his website: https://nickherle.com/ or connect with him on LinkedIn: https://www.linkedin.com/in/nickherle/