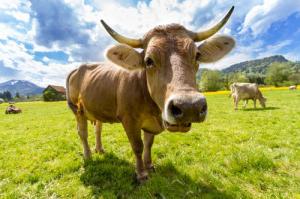 Consumer choice. What is more apple pie than that? We don’t even think about it. Whether clothes, cars, or cosmetics, we pick the brand and shop for the deal.

It’s called the free market, and in elementary school we learn that the strength of our economic system is based on the interplay between competition and choice.

But most kids never get the lesson on the exceptions to free market principles. When it comes to Big Meat and Big Dairy, the free market is a fiction. The system is rigged.

Trade groups representing large-scale animal agribusiness – which already harvest a dizzying number of government subsidies – give themselves an added boost by gaming the system and getting government money to fund their trade associations.

It’s done through a de facto tax to serve their own purposes, working against the interests of consumers.

This tax is levied on hard-working and often struggling farmers and ranchers. And for consumers, well, they pay for it with every purchase at the meat counter or dairy case.

It’s called a USDA Commodity Checkoff Program, and like any tax, no rancher, farmer, or consumer, has the choice to opt out. The difference, though, is that the public doesn’t elect those who decide where and how to spend these millions of check-off tax money. It’s a special-interest feast, with agribusiness officials controlling every decision from farrow to finish.

U.S. Rep. Dina Titus, D-Nev., in introducing the Opportunities for Fairness in Farming (OFF) Act last week, said, “Family farmers should not be forced to pay into organizations that sometimes lobby against their own interests and threaten animal welfare.” Titus’ bill. H.R. 5563, mirrors the Senate version of the OFF Act, introduced in 2019 by U.S. Senators Mike Lee, R-Utah, Cory Booker, D-N.J., Rand Paul, R-Ky., and Elizabeth Warren, D-Mass. Perhaps the first time that particular Senate quartet has been singing from the same sheet of music, their collective aim is to bring much needed transparency and accountability to the federal government’s commodity checkoff programs.

Agriculture trade groups, such as the National Cattlemen’s Beef Association (NCBA), use millions from these checkoff programs for lobbying to fight sensible farm animal welfare policies, country-of-origin labeling (COOL) standards, clean air and water rules, and even the overuse of antibiotics on factory farms. Rank-and-file farmers and consumers aren’t supposed to be financing this dirty work, but that’s exactly what’s happening.

Sensible family farmers concerned about the proper treatment of animals in their care recoil when they learn the money is spent to undercut their values. Principled lawmakers in Congress don’t like it because it has become a camouflaged lobbying slush fund for agribusiness. And of course, members of the public are livid to learn that they are ultimately paying the bill for this pork-barrel scheme.

Just at the time when consumer concerns about how and where their food is produced are rising, the checkoff program becomes a powerful force for meat-industry conformity.

Records show that industry appointees of the Board dreamed up a way around prohibitions on the use of checkoff funds to finance the operations of the National Pork Producers Council (NPPC), a private trade association and the industry’s lobbying arm.

Remember the slogan “Pork: The Other White Meat.” Well, that was an advertising campaign originally paid for by the checkoff-financed Pork Board, which allowed the private trade association to use it at no cost. Then, after the trade association tired of the campaign – exhausting its market value, if you will – the Pork Board licensed it for use (which never really occurred) at a preposterously overinflated price.

The head of the Board wrote in an uncovered email: “that should get NPPC the money it needs for the next four years.” He was right about that, but off on the timeline. It turned into a 20-year sweetheart deal.

That’s right, for two decades checkoff dollars started flowing to the industry’s lobbyists. How many dollars? Well, $60 million actually, with the funds paid out annually in $3 million installments.

Hang on, it gets crazier. This annual misuse of checkoff dollars has continued even after a referendum by America’s hog farmers in 2000 to eliminate the checkoff entirely.

How could that be? The U.S. Department of Agriculture chose to ignore the results of this election. As if to say, who are pig farmers to decide which “tax” levies they pay?

The chicken industry has never had a checkoff program, and despite that, consumption of drumsticks and breasts has surged for the last 30 years, especially compared to beef, pork, and dairy. This comparison gives us plenty of evidence that the checkoff program hasn’t even fulfilled its original purpose of lifting sales, despite hundreds of millions flowing to the industry chieftains every year.

In the end, farmers pay the tax, but get precious little in return. The lobby trade groups, in the end, are the ones who get the keys to the bank.

Animal Wellness Action is a Washington, D.C.-based 501(c)(4) organization with a mission of helping animals by promoting legal standards forbidding cruelty. We champion causes that alleviate the suffering of companion animals, farm animals, and wildlife. We advocate for policies to stop dogfighting and cockfighting and other forms of malicious cruelty and to confront factory farming and other systemic forms of animal exploitation. To prevent cruelty, we promote enacting good public policies and we work to enforce those policies. To enact good laws, we must elect good lawmakers, and that’s why we remind voters which candidates care about our issues and which ones don’t. We believe helping animals helps us all.