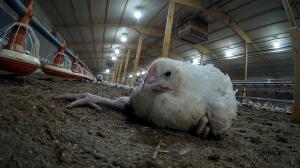 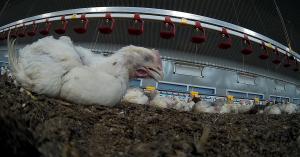 A weakened chicken struggles to stand and breathe, without hope of veterinary care. 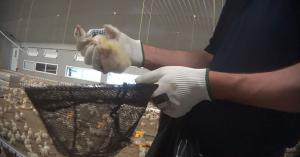 Culling by hand is just one of many abuses found by Animal Equality’s investigators.

Animal Equality calls on McDonald’s to eliminate some of the worst abuses for chickens in its supply chain after its undercover filming reveals suffering.

The abuses found on Moy Park’s farms are horrific and must come to an end. We're calling on McDonald’s to stop these terrible abuses from happening within its supply chain.”
— Sharon Núñez, President of Animal Equality

The troubling footage, captured covertly by an Animal Equality undercover investigator in 2019, reveals:

– Chickens deprived of water as drinking troughs are routinely raised to a height that they are unable to reach;
– Hundreds of chickens suffering agonizing deaths each day as workers painfully crush the chickens’ necks in their hands;
– Chickens developing raw skin burns on their feet and chests from filthy, urine-soaked floors;
– Chickens bred to grow so big, so quickly, that they suffer from excruciating leg injuries and are unable to carry the weight of their own oversized bodies;
– Chickens crammed into immensely overcrowded barns, barely able to move or stretch their wings.

Michelle Baxter Wickham, Corporate Outreach Manager at Animal Equality UK, said: “McDonald’s continues to do business with Moy Park, despite our many investigations revealing severe animal suffering under their watch. Now it appears that depriving chicks of water is business as usual at this McDonald’s supplier. McDonald’s has shown little care for animal welfare or sustainability—this tragic treatment of animals results in millions of chicks dying every year before they even reach the slaughterhouse.”

Sharon Núñez, President of Animal Equality, added: “The abuses we found on Moy Park’s farms are horrific and this unchecked cruelty must come to an end. We are calling on McDonald’s to join its competitors in signing on the Better Chicken Commitment and stop these terrible abuses from happening within its supply chain.”

Concerningly, two of the farms investigated have been the center of previous serious animal welfare complaints. In June 2019, Animal Equality filmed similarly poor conditions in Mount Farm, with chickens crammed into gigantic sheds, suffering from leg and breathing difficulties, and animals living amongst rotting carcasses. In July 2019, thousands of chickens were found to have died at Kettlethorpe Farm due to a sweltering heatwave and a lack of appropriate ventilation. When questioned about the chickens under their watch, Moy Park farm workers claimed “we care about them… we really do”.

Animal Equality is running an ongoing public awareness campaign, urging McDonald’s to sign the Better Chicken Commitment, as is fellow animal protection organization The Humane League. The Better Chicken Commitment aims to reduce the suffering of chickens used for meat by addressing the most serious welfare concerns. The six-point ask calls on companies to eliminate fast-growing breeds, high stocking densities, and often ineffective pre-slaughter stunning methods from their chicken supply chains by 2026.