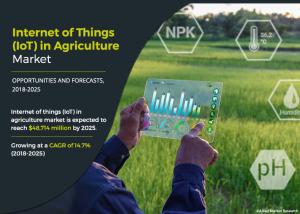 There is a considerable increase in population, which boosts the food demand. This is one of the prime drivers of the IoT in agriculture market.

PORTLAND, OR, UNITED STATES, September 16, 2020 /EINPresswire.com/ — Internet of Things (IoT) in Agriculture by System and Application: Global Opportunity Analysis and Industry Forecast, 2018 – 2025,“the global IoT in agriculture market is expected to generate $48,714 million by 2025, growing at a CAGR of 14.70% from 2018 to 2025. In 2017, the precision farming segment led the IoT in agriculture market, followed by the livestock monitoring segment. Growth in this segment is supplemented by rise in global population, development of internet technology, where localized data processing is done on the farm itself, which helps lower the cost and increase the adoption of IoT technology in precision farming.

In addition, rise in the global food demand and decrease in cultivable land generates the demand for IoT in agriculture market. Furthermore, initiatives by various developing and developed countries such as the U.S. by proposing the Precision Agriculture Connectivity Act of 2018 that fueled the investment and rapid development of network in the rural region, which is expected to further drive the growth of the IoT in agriculture market.

There is a considerable increase in population, which boosts the food demand. This is one of the prime drivers of the IoT in agriculture market. Data for the development of IoT application in the agriculture industry is provided by various agriculture-related industries such as agriculture equipment, seeds, and chemical manufacturers. Filling the gap between demand and supply across the globe requires more resources such as technically advanced equipment, skilled personnel, and capital for majority of companies. Investors have a major role to play in meeting these challenges and opportunities to benefit.

Key Findings of theInternet of Things (IoT) in Agriculture market:

Allied Market Research (AMR) is a full-service market research and business-consulting wing of Allied Analytics LLP based in Portland, Oregon. Allied Market Research provides global enterprises as well as medium and small businesses with unmatched quality of “Market Research Reports” and “Business Intelligence Solutions.” AMR has a targeted view to provide business insights and consulting to assist its clients to make strategic business decisions and achieve sustainable growth in their respective market.