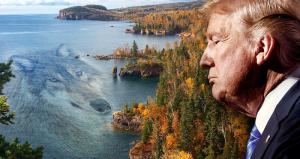 President Trump’s Dept. of Interior is committing political malpractice with a plan to remove federal protections for wolves in the Northern Great Lakes region.

Trump is trailing in the polls not because rural communities are showing soft support for him, but because he’s badly lagging with suburban voters, especially women.”
— Wayne Pacelle

Michigan, Minnesota, and Wisconsin are swing states in presidential politics. They are also wolf states – with the family-oriented gray wolves stalking the boreal forests in search of deer and moose and beavers in their northern reaches.

President Trump’s Interior Department team is committing political malpractice by announcing today – just days before the close of the national election – a plan to remove federal protections for wolves in the Northern Great Lakes region, and also throughout the rest of their scant range in the lower 48 states. Two top Administration officials are in Minnesota to tout the final action to remove federal protection for the wolves and turn over management to state fish and wildlife agencies clamoring for the chance to open trophy hunting and trapping seasons for wolves.

President Trump, by all estimates, is behind in the polls in all three states, and this is a calculated political maneuver to boost support in them.

I want to tell the Administration that they are upside down on the politics of this issue.

Trump is trailing in the polls not because rural communities are showing soft support for him, but because he’s badly lagging with suburban voters, especially women.

He may not realize that attitudes toward wolves have come a long way since the fairy tale Little Red Riding Hood’s portrayal of the “big bad wolf.”

Just look at the treatment of Canis lupus in perhaps the most popular television series of all time, “Game of Thrones.” The wolves became part of the Stark family, whose characters were the central actors in the seven-year, immensely popular TV drama. The wolf is the totem animal emblazoned on the flag of House Stark. The forebearers of the dogs we love in our homes, they were viewed as powerful, family-oriented, brave, loyal, and intuitive – the very attributes we admire in people.

The reality is, wolves play a critical role in their native ecosystems, as anyone who has watched the powerful documentary “How Wolves Change Rivers” can attest. Biologists in Yellowstone have found that wolves push deer and elk populations from overgrazed areas, enabling aspen and willow to reclaim ground and restore forest health. Restored streams have attracted more spawning salmon and trout, plants, songbirds, water-wading birds, and moose.

Wolf predation helps maintain healthy deer populations, lowering the frequency of deer-auto collisions and prevalence of crop losses. This saves private citizens and governments tens of millions of dollars a year. And wolves are a bulwark against Chronic Wasting Disease, a brain wasting disorder that kills deer and has cost states hundreds of millions of dollars to contain.

Wolves also generate jobs and commerce. The International Wolf Center in Ely, Minn. contributes $3 million to the local economy annually, and annual visitor spending has increased by $35 million since the reintroduction of wolves in the states surrounding Yellowstone National Park.

The Trump Administration plan, if not stopped in the courts, would result in at least 1,500 wolves being killed a year in the three Great Lakes states, with the states seeking to use steel-jawed leghold traps and snares. Wisconsin’s diabolical plan would allow hunting of wolves with packs of dogs – enabling animal fighting without the pit or the wagering, but with all the same cruelty.

And the killing would be done not for food, but just for the thrill of killing the animals and claiming a trophy.

The American public will no longer tolerate that kind of wanton cruelty and waste.

In 2014, I worked on two referendums in Michigan to nullify an effort by state lawmakers to open up a trophy hunting and trapping season on wolves. Voters favored the measure to bar wolf hunting by an overwhelming margin, with 64 percent of voters in one measure favoring continued protections for the wolves.

Remember, that’s Michigan, which is viewed as a battleground state, and it is a key audience for today’s choreographed event.

The notion that wolves have recovered across the range only passes the straight-face test if you believe “barely hanging on” constitutes recovery. Add up all the surviving wolves in the lower 48 states and they amount to only 5,000 or so animals – fewer wolves ambling over millions of square miles than there are people in the 12-square-mile small town of Truth or Consequences, New Mexico.

There are not more than 200 wolves in any one of the states where they’ve recently set foot, including California, North Dakota, Oregon, South Dakota, Utah, and Washington. If wolves lose federally protected status, then despite overwhelming public opposition, the mass killing of wolves will resume in more than half a dozen states where ranchers, trophy hunters, and trappers hold the balance of power and view them as invaders.

And let’s put wolf predation and conflicts in perspective. Although some wolves do occasionally prey on livestock, it’s minimal. Wolf kills account for between 0.1 percent and 0.6 percent of all livestock deaths. Of all the world’s top predators, they are among the least threatening to human beings – with no documented attacks by healthy wolves on people in the lower 48 states in the last century.

Wolves are an economic and environmental boon, promoting wildlife-associated tourism, providing a check on prey populations, stemming wildlife disease, and strengthening the vigor of the ecosystems.

In a nation with more than 320 million people and just a few thousand wolves, only a distorted view of reality can lead one to conclude that wolves have recovered. Killing wolves for their heads and hides – or for the thrill and spectacle – is bad policy. It’s also bad politics. We may get some proof of that on Tuesday when the suburban precincts report their results in Michigan, Minnesota, and Wisconsin.

The long period of persecution that wolves endured at our hands should be a lesson of history, not a guide for future action.