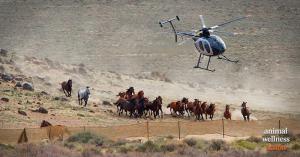 There is hope, and a better solution to maintain sustainable wild horse and burro population levels on our public lands.”
— Marty Irby

WASHINGTON, DC, UNITED STATES, December 2, 2020 /EINPresswire.com/ — In 1891, just five years after migrating from Germany to the U.S., a 21-year-old Frederick Trump set out in search of prosperity and fortune on the Western Frontier and soon settled in the newly admitted State of Washington. Like many other entrepreneurs, he'd heard tales of financial windfalls in the West, mainly through mining for gold and silver.

Despite the opportunities mining presented, young Frederick Trump sought a different path and began "mining the miners," staking claim to land that he had no intention of mining, and instead began building hotels, restaurants, and boarding houses, eventually working his way north along the White Pass route to Canada's Yukon territory, opening a tent restaurant in the Spring of 1898.

Horse meat was not uncommon fare because these work animals perished as a consequence of overworking and dangerous passages. The White Pass route included the notorious "Dead Horse Gulch," so named because drivers whipped animals of transport until they literally dropped dead on the trail. Trump and others took advantage of these supplies of fresh meat and served them up to the miners and other pioneers and settlers.

After building his fortune on the backs of these horses, Frederick Trump later settled down in Queens, New York where his grandson, and the 45th President of the United States, Donald J. Trump would be raised.

What was once a matter of sustenance and survival is now considered a matter of cruelty. Horses are no longer worked to death, and they are not raised for food. Because of their historic place in transport and labor, they are respected and honored for their long record of service.

Americans don't eat horse meat today, and lawmakers have shuttered all the remnant horse slaughter plants in recent decades. Congress routinely passes a year-over-year prohibition on slaughtering horses just to make sure nobody gets back into this ugly enterprise. But this year, the U.S. Senate failed to include that prohibition in its spending bill for 2021, and there's no guarantee the ban will be maintained in the final spending bill for next year.

This comes on the heels of a terrible plan devised by the so-called Humane Society Legislative Fund (HSLF), Humane Society of the U.S. (HSUS), and the National Cattlemen's Beef Association (NCBA) that's caused tens of thousands of iconic American wild horses to be rounded up by the Trump Administration's Bureau of Land Management (BLM) and incarcerated in holding facilities. It's a bizarre sellout by the HSUS and HSLF to their new partners at the NCBA, and we're still scratching our heads trying to figure out their long-term motives.

On top of the Senate's failure to maintain the ban on horse slaughter, they've allocated an additional $14 million for more mass roundups in 2021 as a result of HSUS, HSLF, and NCBA's lobbying efforts. We know the HSUS and HSLF have been struggling financially, shucking animal care facilities in Florida, and Oregon, but they've pledged to maintain the Cleveland Amory Black Beauty Ranch in Texas. With tens of millions of dollars now on the table, it would be worth investigating to learn if the HSUS plans on turning Black Beauty into a long-term holding facility to warehouse wild horses and burros and rake in some extra cash.

But there is hope, and a better solution to maintain sustainable wild horse and burro population levels on our public lands. The PZP contraceptive vaccine has been recognized by the National Academy of Sciences as the most promising and cost-effective method for managing wild horse populations.

It's a humane solution that can be administered to female horses via a dart injection. A dose is $30 and takes one treatment per year and becomes self-boosting after 5-7 years. By comparison, warehousing costs around $1,600 per year per horse.

In July, U.S. Reps. Steve Cohen, D-Tenn., Dina Titus, D-Nevada, Animal Wellness Action, and other wild horse protection groups, led the charge to successfully pass an amendment through the U.S. House that would require the BLM to utilize $11 million of their 2021 funding to implement immunocontraceptives in the field. The measure's passage was a historical feat clearing the chamber by a voice vote.

We are fighting tooth and nail to save our iconic American wild horses and burros, and we're now headed into the final battle in the 116th Congress to secure the $11 million provision in the final year-end spending package that'll be voted on in the coming weeks, along with the ban on horse slaughter. And we've declared today, #WildHorseWinDay, in an effort to rally animal advocates to weigh in with your support. Please join in helping by clicking here and contacting your Members of Congress.