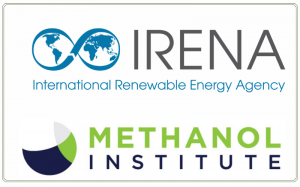 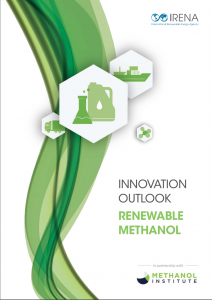 WASHINGTON, DC, UNITED STATES, January 27, 2021 /EINPresswire.com/ — Today, the International Renewable Energy Agency (IRENA) and Methanol Institute (MI) released a joint report "Innovation Outlook: Renewable Methanol." This comprehensive report discusses market status and outlook of renewable methanol for the main applications such as feedstock for petrochemicals and transport sectors such as shipping, car and truck fuel. It also elaborates on what policy actions are needed to facilitate an uptake of renewable methanol in the next decade.

Methanol is essential for the chemical industry and represents an emerging fuel for a wide range of uses. Although largely produced from fossil fuels, it can also be made from sustainable, renewable-based energy sources.

The need to mitigate climate change and eliminate carbon dioxide (CO2) emissions from all kinds of energy use has prompted rising global interest in renewable methanol. The shift to such types – derived from biomass or synthesized from green (renewable-based) hydrogen and CO2 – could expand methanol's use as a chemical feedstock and help to make industry and transport fuels carbon neutral.

This outlook from the International Renewable Energy Agency (IRENA) and the Methanol Institute identifies challenges, offers policy recommendations, and explores ways to produce renewable methanol at a reasonable cost.

· Ensure systemic investment throughout the value chain, including technology development, infrastructure, and deployment.

· Acknowledge how renewable methanol can contribute to carbon neutrality in "green deals", COVID-19 economic recovery packages and hydrogen strategies.
· Translate the political will for carbon reduction into regulatory measures and support.

· Level the playing field for renewable methanol through public policy, including electrification and sector coupling measures, which would integrate renewable power supply with fuel demand throughout the economy.