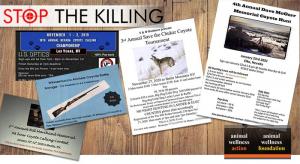 On Tuesday, March 2, 2021, the Clark County Commission will vote on a resolution to condemn Wildlife Killing Contests in Nevada.

This resolution conveys the values of not only the Clark County Commission but the will of the people of our community, who want to keep our public lands free from these dangerous contests.”
— Commissioner Justin Jones

LAS VEGAS, NEVADA, UNITED STATES, February 25, 2021 /EINPresswire.com/ — On Tuesday, March 2, 2021, the Clark County Commission will vote on a resolution to condemn Wildlife Killing Contests in Nevada. The resolution was brought for discussion in early February by Commissioner Justin Jones and received broad support from all members of the Commission. The AWA-sponsored measure also earned support from the Sierra Club Toiyabe Chapter and the Center for Biological Diversity.

“The Clark County Commission is on the verge of passing an important resolution to condemn inhumane Wildlife Killing Contests in our state,” Annoula Wylderich, said Nevada director of Animal Wellness Action. “This is the biggest jurisdiction in our state and it’s my hope that every county in Nevada takes action to root out this form of needless cruelty to wildlife.”

“Residents and visitors to Clark County use our extensive public lands for hiking, rock climbing, and other outdoor activities that require a healthy environment, and the activities of killing contest attendees pose a threat to their safety and well-being,” Shelbie Swartz, a Nevada-based wildlife advocate for Animal Wellness Action. “These killing contests are an affront to anyone who cares about wildlife in our state, whether you are an avid hunter or a devoted animal welfare activist.”

“This resolution conveys the values of not only the Clark County Commission but the will of the people of our community, who want to keep our public lands free from these dangerous contests and protect our wildlife from these cruel competitions,” Commissioner Jones said. “With this resolution, we send a signal to the Nevada Department of Wildlife that we support them if and when they choose to stand against these contests and uphold scientifically-based wildlife management programs.”

Nevada’s neighboring states have banned these contests in recent years, which has driven contest participants and organizers to flock to Nevada, one of the last states in the Southwest that allows these contests to persist. In these contests, teams of two or single shooters head out at dawn to kill as many coyotes, fox, rabbits, bobcats, or other small mammals as they can, to win prizes such as belt buckles, guns, or monetary awards. They typically throw away the animals and leave lead ammunition strewn on public lands for other wildlife to ingest. The spent lead ammunition courses through the food chain, poisoning and killing abundant and endangered wildlife alike.

In the past few years, more than 24 wildlife killing contests have occurred in Nevada, including in and around Clark County, with four hosting their weigh-ins and “celebrations” in Las Vegas and Henderson. The killing happens across the entire state, with participants encouraged to kill on public lands such as BLM and USFS lands. Recently, competitions have migrated to an app-based system where a virtual check-in system allows for “anyone with a smartphone” to compete, allowing killing to occur anywhere.