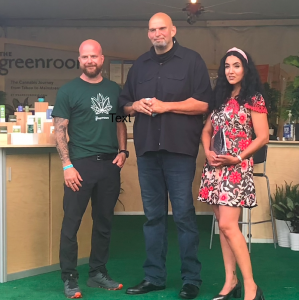 The belief that cannabis is a dangerous drug is absurd. Most importantly, it has led to disproportionate prosecution and harm to Black and brown communities.”
— John Fetterman, Lt. Governor of PA and US Senate Candidate

PHILADELPHIA, PENNSYLVANIA, UNITED STATES, June 7, 2021 /EINPresswire.com/ — The annual Philadelphia Flower Show, the oldest and largest horticultural event in the US, featured a nationally renowned political figure over the weekend. At this year's show, which began on June 5 and runs through June 13, at FDR Park in South Philadelphia, Pennsylvania Lieutenant Governor and Democratic Candidate for U.S. Senate John Fetterman appeared at the Green Room. The Green Room display is front and center at the Flower Show, with a prominent exhibit and educational sessions being run by the Cannabis-focused marketing firm Chronic.

Mr. Fetterman is one of the leading advocates for the legalization of cannabis in the US and national outlets have published his unique perspective on the matter. Mr. Fetterman believes that cannabis needs to be legalized for jobs, justice, veterans, farmers, and revenue. He strongly believes that it is time to end this failed war on drugs.

"The belief that cannabis is a dangerous drug is absurd. Most importantly, it has led to disproportionate prosecution and harm to Black and brown communities,” said Mr. Fetterman. “The argument for legalized weed is easy. On top of reducing harm to these communities, it would mean added tax revenue, more jobs, and new crops for farmers. It is time for Legal Weed for PA and the USA."

Mr. Fetterman was hosted by Chronic, the Conshohocken, PA-based marketing firm born of award-winning creative brand agency, 20Nine. 20Nine CEO Greg Ricciardi created Chronic to serve the unique needs of the Cannabis industry, and the company boasts one of the most impressive client rosters in the US.

“We’re thrilled to have hosted John Fetterman at the Flower Show this year to help Pennsylvania residents understand why our state needs to legalize cannabis and how we all can benefit from its economic impact,” said Mr. Ricciardi. “At Chronic, we’re striving to be a primary resource of factual information on Cannabis nationally, and not just for Flower Show visitors and PA residents. With other states that have legalized cannabis realizing hundreds of millions of dollars in tax benefits, we’re all for legalization.”

About Chronic
Chronic is a purpose-first strategic brand consultancy and brand marketing agency created from the award-winning Creative Brand Agency, 20Nine. Based in Philadelphia, Chronic is dedicated to helping businesses in the cannabis market build strategic brand foundations, connected brand stories, cohesive identity systems, and engaging marketing executions focused on actionable responses, and all built around a clear and compelling purpose platform. For more information about Chronic, visit: www.wearechronic.com.