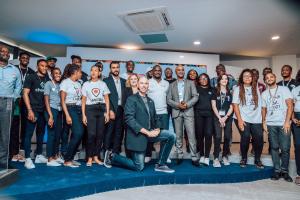 DAKAR, SENEGAL, October 14, 2021 /EINPresswire.com/ — The inaugural Telecel Group Africa Startup Initiative Program (ASIP) Demo Day, powered by Startupbootcamp (SBC) AfriTech, showcased the innovativeness of the top ten startups selected from a pool of over 2,200 applications in the first accelerator event of this scale to be held on West African soil.

The event took place at the Dhub in Dakar, Senegal – a space commissioned by the General Delegation for the Rapid Entrepreneurship of Women and Youth (DER/FJ) and established by the President of the Republic of Senegal, Macky Sall.

The ASIP has entered into a partnership with DER/FJ, making the Dhub the Program’s main campus for the next three years. This arrangement is part of a national effort to drive entrepreneurial activity in Senegal, which will also see the introduction of several new innovation hubs across the country, to decentralise entrepreneur development.

DER/FJ Minister, Papa Amadou Sarr, said: “Having the Telecel Group ASIP Accelerator Program hosted here in Dakar marks the next phase of our strategy to develop a top tier ecosystem. We are therefore heartened to be associated with this great initiative and highly value the opportunity to witness the resourcefulness and powerful creativity of young Africans from all over the continent whose ideas and commitment are the driving force of our social and economic development and prosperity. This is the beginning of a strong and fruitful partnership, aligned with our vision to position Senegal amongst the top ten African startup ecosystems in the world.”

In his opening comments, SBC AfriTech CEO and Co-Founder, Philip Kiracofe said: “The accelerated disruption caused by Covid has impacted every aspect of life and has created fertile ground for startups to step in with radically new solutions.”

“These are the future businesses that will build and lead economies on the African continent,” added Telecel Group Executive Board Deputy and ASIP Director Eleanor Azar. “These businesses find solutions to their everyday challenges, because they understand the context in which they live and the needs thereof better than anyone. All we have to do is support and nurture them to become the leading businesses of the future.”

The Demo Day served as an opportunity for each startup to reflect on how the past three months had impacted their businesses.

Samuel Njugana, CEO of Kenyan startup Weza Ventures, said that over the last three months he had secured a new partnership to provide services in Ethiopia and is now looking for similar partnerships in other countries as a route for organic market expansion.
Thanks to the program, the future looks equally bright for Zambian digital health platform Dawa Health. Having signed a partnership with the United Nations Population Fund (UNFPA), Care International, Oxford University and the Zambia Information Communication and Technology Authority, COO Progress Mahureva hopes Dawa Health will become the go-to health provider in Zambia by the end of the year.

Dare Odumade, CEO of Nigerian-based Chekkit Technologies, was grateful for the visibility the program offered his company. Not only has the startup since been accepted onto the SAP global Foundries program, affording them the opportunity to integrate into SAP and launch a pilot with SAP customers, it also completed a pre-seed round of $500k and has garnered additional interest from almost a dozen VCs and investors. The startup will be launching a POC with Telecel Group to operate in multiple African countries.

For Zimbabwean online platform Thumeza, which provides access to working capital loans for small-scale transporters, the tutelage from the ASIP Accelerator program enabled the company to grow much faster than it would have alone. CEO Gugulethu Siso said that one key lesson she learnt was the importance of ongoing experimentation.

As a result of the program, Ghanian buy-now-pay-later platform Motito obtained a license to use financial data from mobile phones to improve credit scoring capabilities by as much as 50%. CEO Tobi Martins says that a highlight of the program was joining the FINTECH100 community which includes some of the world’s most promising startups.

Nigerian health insurance application NucleusIS benefitted from the program’s masterclasses on customer discovery, lean startups and investments. As a result, CEO Olukayode Odeyinde is looking to deepen the company’s expansion into Ghana as well as to test the Kenyan market over the next six months.

Since launching in August, Cameroonian agricultural advisory service Agrix Tech has grown substantially and acquired over 500 new clients. Founder Adamou Nchange Kouotou said a highlight of the program was the formation of a new partnership with micro finance institution LaMEC, which will be able to provide micro loans to Agric Tech’s client farmers.

For Nigerian pay-when-you-can platform WorldBay Technologies, the networking between startups enabled them to identify many synergies for their businesses. CEO Lanre Smith says he has a clearer direction on the company’s route to scaling and is looking to close the current round of funding in order to execute its growth plans.
Herconomy CEO Ife Durosinmi-Etti said that in the ASIP Accelerator Program she has gained a partner that truly believes in the Herconomy vision, one that has given her a global stamp of approval which has fuelled the company’s growth. The Nigerian startup has since signed its first global partnership with Amazon, becoming Amazon’s first recruitment partner in Nigeria for the EU region of its Engineering Services division.

Teslim Sulaiman, Co-founder of Nigerian online stack-learning platform Ustacky, felt confident that with the training and experience gained from ASIP, the company is set to become a large player in the African Edtech space in the next two to five years.

Kiracofe concluded the event by saying: “We are incredibly proud of this cohort and how their work in their chosen industries will improve our lives. These founders are delivering solutions that are impacting Africa and may someday be available in your community.”